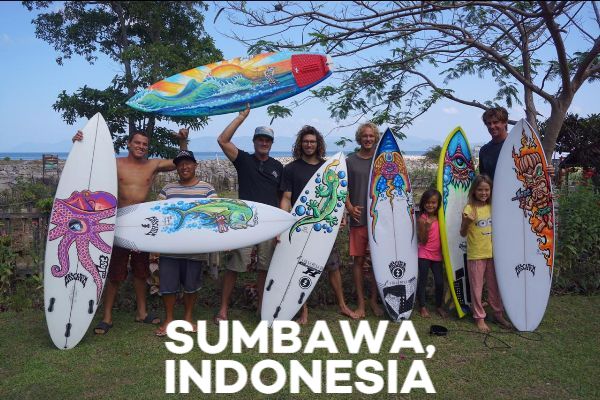 I’ve been painting a lot of surfboards lately.

I love it because it’s where I started with art 30 years ago – and it takes me around the world surfing and meeting cool people.

In September I traveled Indonesia, surfing and painting boards.  That surf trip evolved into a month-long Posca painting workshop party!

Everywhere I went, people asked me to show them how to paint with Posca Paint Pens.  Kids, surfers, old guys, everyone was joining in on painting.

I’ll tell you more about Indo later, but for now, I want to tell you about my online Posca surfboard painting courses and WHY I’m giving away my painting process in both a FREE  intro version as well as an in-depth PAID version.

It’s because I love sharing the stoke of art, and I know without a doubt that the Posca painting process that I use can literally change people’s lives.

My goal has always been to share my process with everyone who wants it.

But, there was one problem and that was:  how could I reach ALL the people that want to know how?

For years I’ve had people ask a ton of questions about painting boards:

There are so many peeps asking questions that I stopped trying to answer them one-on-one because it’s not possible to answer hundreds of questions a week.

And then my wife Maria and I figured out HOW to reach all of those people:  we invested in a film crew and a new website and we created a very in-depth video course on How to Paint A Surfboard.  It took months to develop and now you can get it here.

BUT, we found that sometimes people aren’t ready to dive totally in and take the course, they just want one question answered.

So, then I developed something for those who aren’t ready to invest in a complete course:  a FREE INTRO to painting a surfboard – a 14 day e-mail course that gives the basics.  You can access that HERE.

I have a favor to ask:  If you you or someone you know has an interest in learning how to paint surfboards the right way, using a medium and process that lasts decades, please share the links in this email to both the FREE INTRO E-Course and the In-Depth Course .

I want to get these courses out into the world in a big way, and your help would be appreciated.

LEAVE A COMMENT if you have any questions about my surfboard painting courses.  I’d love to hear from you. 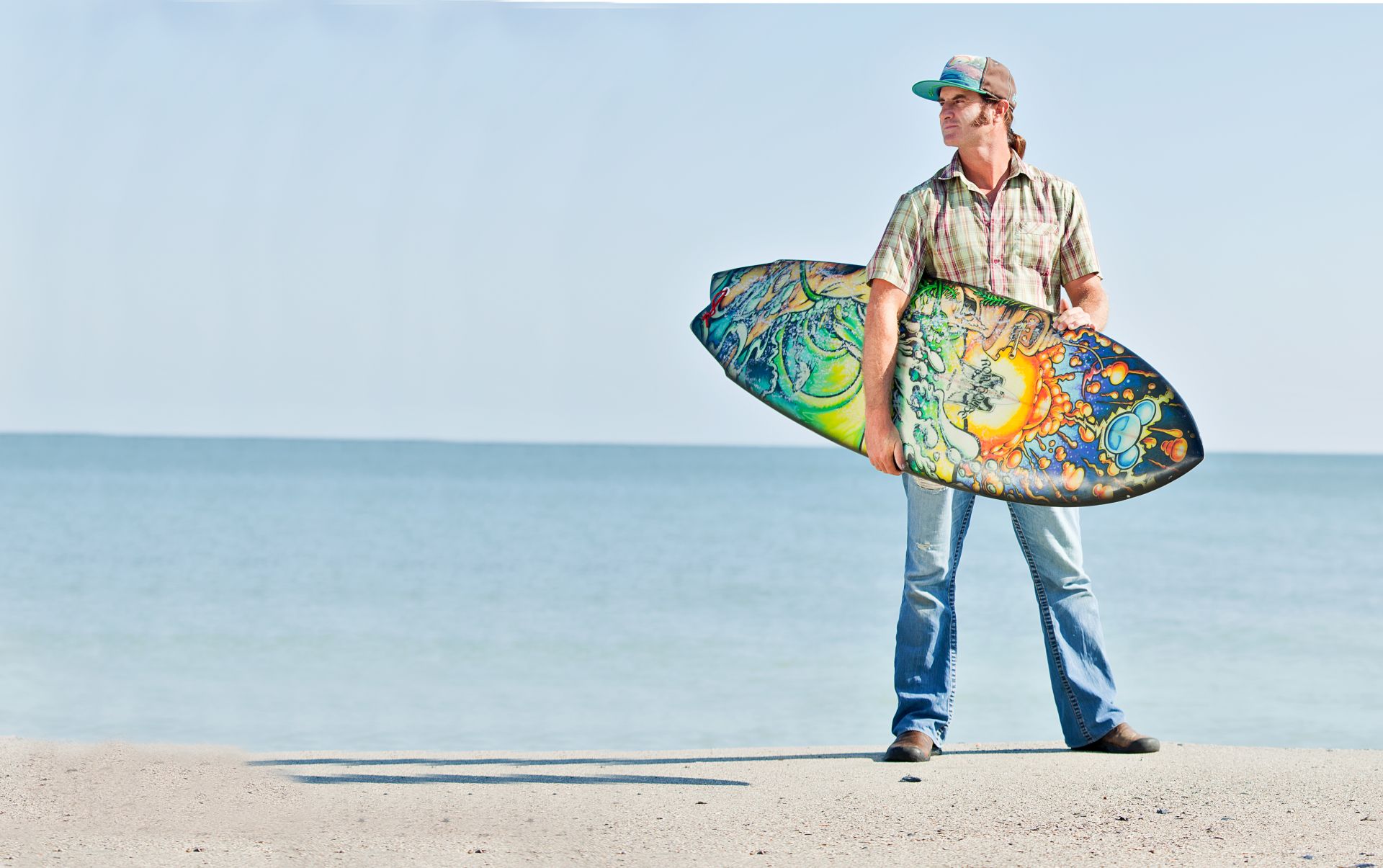 April 13, 2018 – Myrtle Beach, SC – Drew Brophy, an American artist born in 1971, is a self-taught, professional illustrator and fine artist. Brophy is globally known for his surfboard art and distinctive style of surf-inspired paintings. He is credited as the artist who changed the way that surfboards were painted worldwide, in the 1990s, using painting techniques that he developed with opaque paint pens.

Brophy grew up surfing in Myrtle Beach, South Carolina. He left the area in his early 20s to experience surfing throughout the world while creating art inspired by his travels. He currently resides in San Clemente, California.

Brophy’s art has a distinctive style of bright colors and exaggerated features and is a direct expression of his love for surfing and nature. His images, which have become ubiquitous in surf culture and beyond, capture the emotions of having fun at the beach and a love for the ocean. Through his travels, Brophy has been able to reach a global audience. His art has been featured in mainstream magazines, such as Spin and Playboy, and have graced the cover of several surf-culture magazines, such as Surfing Magazine and Longboard Magazine. He has been commissioned to create surf-inspired works for tech companies such as Google, IBM and Western Digital. Brophy’s designs have adorned hundreds of beach lifestyle products, including skateboards, surfboards, bodyboards and apparel.

The exhibition features over 70 of Brophy’s most iconic sketches, paintings and surfboards, arranged chronologically – from his early illustration works as a teenager to works for action sports companies, such as Liquid Force Wakeboards, Lost Surfboards and Sector 9 Skateboards, and more recently for bands and musicians, like Sublime with Rome and Eddie Vedder. The exhibit finishes with Brophy’s expansion into his latest style of work inspired by physics and mathematics, incorporating sacred geometry into large, mixed-media paintings on canvas.

Most notable in the exhibit is the visual demonstration of the evolution of the artist’s work from sketch to product output. For many of his iconic works, the exhibit includes Brophy’s original graphite sketch, the painting and the item that the illustration was later printed on, allowing the viewer to see the complete progression of a design.

Brophy says of the exhibit, “I feel honored to have this opportunity to showcase my life’s work. This exhibit celebrates a 30-year journey of surfing and drawing that began in Myrtle Beach and allowed me to use those skills to travel the world with my family. It is my intention to inspire younger artists to imagine what is possible for themselves.”

**PRESS IMAGES (Available ONLY for press to use in connection with Drew Brophy’s Museum Exhibit):  https://www.dropbox.com/sh/7qkhchd1dikr9r5/AACTMMfKCkU0qXdkcbYJlgXsa?dl=0

The Franklin G. Burroughs-Simeon B. Chapin Art Museum is Myrtle Beach’s only art museum. Opened in 1997, this nonprofit museum is located at 3100 South Ocean Blvd and contains seven first-floor galleries with rotating exhibits, four second-floor galleries, an art studio, an art resource library and tea porch with an ocean view. The Museum was named after Myrtle Beach pioneers Franklin G. Burroughs and Simeon B. Chapin for their longtime contributions to the cultural and educational development of the community. The Art Museum’s hours of operation are Tuesday through Saturday, 10 a.m. to 4 p.m. and Sundays, 1 p.m. to 4 p.m. Admission is free.

The Brophy Art Gallery and Design Studio features the illustration and fine artworks of Drew Brophy. Located at 139 Avenida Granada, San Clemente, CA, the gallery has a showroom for designer meetings and it houses the working studio of Drew Brophy.

We are very happy to announce that the Franklin G. Burroughs • Simeon B. Chapin Art Museum in Myrtle Beach, S.C. is curating a Drew Brophy Retrospective Exhibition the summer of 2018.

Many of Drew’s collectors are graciously loaning their Brophy paintings for the exhibition, and for that, we are very grateful.

This is the first museum exhibition devoted to the full scope of the career of Drew Brophy, considered to be one of the most prolific surf inspired artists in history.    Brophy began his art career in his hometown of Myrtle Beach, South Carolina.  The exhibition presents an opportunity to study the artist’s development over three decades, beginning with his early illustration works as a teenager, to his surfboard painting explosion in the 1990’s, and onto his illustrated career designing everything under the sun in action sports.  There will also be an introduction into the current fine art paintings inspired by Drew’s love for nature and physics.

Brophy’s retrospective includes paintings, drawings, sketches and surfboards.  Included in the exhibition are the artist’s most iconic paintings—among them Pure Joy (2001), Sunrise (2006), and celebrated surfboard triptychs from the 1990’s.  Also exhibited will be Brophy’s art on skateboards, wakeboards and apparel, and the accompanying paintings that were used to design them.

Brophy’s career as an illustrator and painter comes full circle in this upcoming exhibition, as he is bringing his art that he created around the world, back home again.

Brophy’s unique style of artwork has inspired thousands of artists to take up painting, using his favorite mediums and emulating his distinct painting style.  (Some of the pieces on exhibit are available and can be acquired here.)

Drew Brophy and his wife Maria will be available at the exhibition for the first two weeks, leading several scheduled, guided tours.

Opening Day Celebration:  From 11 a.m. to 3 p.m. on June 23, 2018.  Celebration will include live music, a hands-on-community mural painting project and surf-inspired workshops.  All events are FREE for the public (except the workshop which is $50/person).

You can paint anything with water based paint pens!

Drew has earned a good living as an artist for over 30 years, using the medium of opaque, water-based paint pens made by Uni Posca.   He has painted surfboards, skateboards, motorcycles, guitars, canvas, just about everything, with this medium.

UNI POSCAS offer a quick learning curve; it’s an easy, un-intimidating method of painting.  Artists who try it fall in love with the possibilities of this medium.

This is a full day workshop, from 10 a.m. to 5 p.m. with a one-hour lunch break in between.   (Lunch is on your own – there are many places to eat within walking distance of the workshop.)  WORKSHOP IS ONLY OPEN TO TEN PEOPLE.

All painting supplies will be provided, all you need to bring is your imagination and your sketchbook (optional)!

You will begin and finish a painting in this workshop, regardless of your experience level.  In one day, you will learn Drew’s most impactful techniques, including HOW TO:

This is a rare opportunity for artists to spend time with Drew on a personal level.  This is his first hands-on private workshop in years.

Drew will welcome questions during the workshop about the business of art and will freely share what has worked for him as a professional artist for over 30 years.

3 – Send payment in the amount of $275.00 via Paypal to mariab@drewbrophy.com – include your name and phone number in the comments section of the payment form on Paypal.

THIS WORKSHOP IS FOR YOU IF YOU FALL UNDER ONE OF THE FOLLOWING CATEGORIES:

IMPORTANT:  Sign up quick – class is limited to ONLY 10 artists! WHAT:  Learn all about these great water-based paint pens.

During this demonstration I will share many different tips and techniques while you join in and create your own mini drawing with POSCA paint pens.

Hope to see you in Miami!