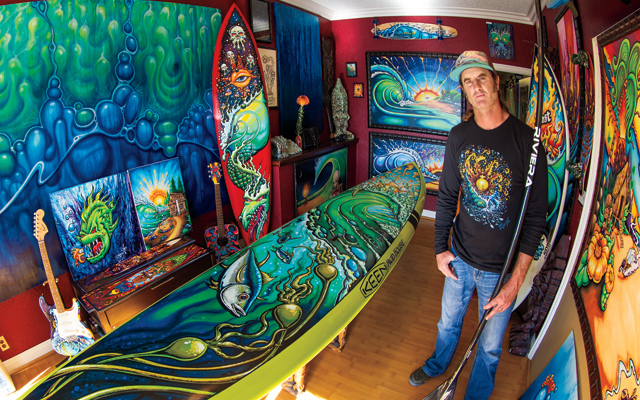 22 Sep How did you find your Niche in Surf Art – SurfCareers.com Interview

This is an excerpt from a Drew Brophy interview with SurfCareers.com – to read the entire article go to:  Drew Brophy Surf Careers Interview

When did you start surfing?
I was about four or five years old.

What is it that you love about surfing?
It’s just me and nature, and the energy of the earth.

Do you have a session that stands out as your most memorable?
Hard to choose. I’ve surfed all of the best waves in the world, I have great memories of all of them.

When did you first get into art and did you always want to pursue it as a career?
I used to draw on the walls when I was a child. I drew on everything. I just did what I did best. Surfing and art were my passions, and that’s where I put my focus.

How did you find your niche in surfboard art?
I love to surf, and I always painted my own surfboards.  People started asking me to paint theirs. In the late 80’s, I was painting my own surfboards using techniques with Uni Posca Paint Pens that no one else was doing or cared about at the time. I developed my own style of painting with Poscas, and I knew it was the better way to paint surfboards. It took years before others caught on. I never gave up on my vision, though it did not come easy. Early on, I painted production boards, traditional airbrush style, for H2O glassing and Kelly Richards’ Perfection Surfboards, in Myrtle Beach, SC.

Then I moved to Hawaii, airbrushing surfboards at Bill Barnfield’s Pro Glass in Haleiwa on the North Shore for the best surfers and shapers in the world.  Brands like Channel Islands, Rusty and Brewer and surfers like Tom Curren and Tom Carroll.  This was a big jump for me, coming from South Carolina. I was in the thick of the industry, and I was in my early 20’s.

But, what I really wanted to do was paint surfboards using my own style and paint pen techniques, but none of the companies would let me.  The local underground chargers on the North Shore wanted it, but the companies held it back. While in Hawaii, I had approached all the best surfboard companies, asking if I could paint their boards using Poscas. No one would let me, my art was too radical. I was turned down by T & C, Local Motion, all the big companies at that time. Nobody cared about what I was doing.

Eventually I moved to California, painting at Ron House’s Surf Glass in San Juan Capistrano.  There, Stewart, Hobie and Harboursurfboards, among others, were being made.  At that time, it was the busiest surfboard factory in the world; it ran 24 hours a day. For a surfboard painter, this was a dream job.  There was always plenty of work.  But I still wanted to paint using my own style, so I continued to seek out other surfboard companies to let me paint my way.  I approached Spyder Surfboards, one of the biggest brands at the time, and just like the companies in Hawaii, they didn’t get what I wanted to do and told me “no”.

One day, on my bike ride home from Surf Glass, I stopped to meet artist Matt Biolos, an edgy, up and coming surfboard shaper.  We were the same age, and his art was really cool.  He was the only person I had seen who was painting with the Poscas, the same as me. He made surfboards for all the young guys.  My art was a perfect match for the vibe of …Lost Surfboards at the time. Matt got it!  I started painting …Lost surfboards that day.  Matt would let me paint whatever I wanted.  I would paint ten boards traditional style at Surf Glass, and then at the end of the day I’d go to …Lost where Matt would have surfboards waiting for me, and I’d paint them in my own style.They were an instant hit with the new breed of surfers. Within six months, my art and …Lost Surfboards began to take over the surf market.  That was 1996.  And the rest is history.  Surfboards were changed forever.

Do you recall when your pieces first started receiving widespread response?
Yes, it was in the late 1990’s, when I started painting, live, at the surf trade shows.  …Lost would exhibit at Surf Expo and other shows. The surfboards were never finished in time before the show for me to paint them.  So my solution was for me to paint, live, at the shows.  What surprised me was ……

READ THE REST OF THIS ARTICLE HERE:  http://surfcareers.com/blog/drew-brophy-artist/

I’m always traveling and doing art projects in other parts of the world.  I wanted to do something cool with my local community in San Clemente, with the idea of inspiring kids (young and old) to get creative, paint, and have fun with it.

I teamed up with Fredrix Canvas, SC Art Supply and Uni Posca for a “Paint with Drew” day, last Friday.

Fredrix Canvas makes the best quality and variety of canvas out there. They have all types for artists to be creative.  Their large canvas panels are perfect for my move-able mural paintings.   I paint on them with paint pens and spray paint; they always come out great.

Last September I painted 20 paintings in 20 days; they were all painted on Fredrix Canvas.

This year, I wanted to see what people can do with Fredrix’s new, awesome “black canvas”.  The black canvas works great with the bright colors I like to paint with.

We invited the public to come out and paint, and they showed up in droves.

Some kids came and wouldn’t leave; they were having too much fun painting.  It was so cool for me to see their enthusiasm for art.

One teenager showed up with a painting he did on canvas, inspired by my style.

Local professional artist Lauren Tannehill showed up with her family, we saw San Clemente business owners and surfers and skaters and everything in between.

It was an awesome day!

Here’s a short photo slide show from the event (All photos shot by Jonie Photo):

FOR 20 DAYS, I’M CREATING 20 ORIGINAL ART PIECES that reflect my thought process and where my ideas originate from.

I’m painting from the heart, just having fun with it.

You might love ’em, you might hate ’em, but either way, I hope they invoke a feeling for you.

The inspiration for this painting came from a great surf session on Saturday.

I love the Fall season in California, because on some days we still get South swells and Santa Ana off-shore winds; the perfect combination for surfing.

This is precisely what happened this past weekend.  There was a beautiful, long period South swell.  The water was 70 degrees and not a cloud in the sky.

I imagined what it would be like to be at Salt Creek with just a few friends.  I surfed with my friend Justin and about 200 other people that I left out of the painting!

It was a great day.  Hope you like the painting.

This painting is   SOLD! To Kevin B. in Texas!

FOR 20 CONSECUTIVE DAYS, I’M CREATING 20 ORIGINAL ART PIECES that reflect my thought process and where my ideas originate from.    TODAY IS DAY 17!

I’m painting from the heart, just having fun with it.  You might love ’em, you might hate ’em, but either way, I hope they invoke a feeling for you.

Today’s painting inspiration was sparked by an unexpected visit from the State Board of Equalization.
.
They sent their tax auditors into the various businesses along the “surf Ghetto” of San Clemente this morning.
.
One of the auditors walked in my studio and demanded to see our papers! (resale tax documents…)
.
After asking me a line of official questions, he said “I had a painted surfboard of yours as a kid.  It was my favorite; you painted a melting sun and wave on it.”
.
Back in my old painting surfboards for  …Lost days, I used to paint a lot of melting waves and suns.  So, I decided to paint one today.
.
I hope you like it!

This painting is   SOLD to Brent B. in Texas!

If you want to consider the next #20×20 painting, email info @ drew brophy dot com and we will put you on the “#20X20 PAINTING PREVIEW” list, in line for the next one.

FOR 20 CONSECUTIVE DAYS, I’M CREATING 20 ORIGINAL ART PIECES that reflect my thought process and where my ideas originate from.    TODAY IS DAY 14!

I’m painting from the heart, just having fun with it.  You might love ’em, you might hate ’em, but either way, I hope they invoke a feeling for you.

This painting was inspired by seeing all the super fit women at the Battle of the Paddle this past weekend.

Paddleboarding just does something to a woman’s physique, toning all of her muscles and making her strong.

It’s great to see more women out on the water enjoying nature and living an active, healthy lifestyle.  The women who are into paddleboarding seem to be strong, confident and adventurous.  It’s very attractive.

This painting is dedicated to all those women who refuse to give up their youth and choose to enjoy life to the fullest.  I think that’s why we are all here.

This painting is available for purchase!  It’s $495.00.  To buy it, please email info@drewbrophy.com.

If you want to consider the next #20×20 painting, email info @ drew brophy dot com and we will put you on the “#20X20 PAINTING PREVIEW” list, in line for the next one.