They don’t buy it.  And you’re frustrated – either they don’t get it, or their budget is too low, etc.   Years ago Drew approached Wham O’ with a proposal to do a line of Drew Boogie Boards for kids.  He knew that they had trouble getting their kids boards into core surf shops, and he also knew that his art would open those doors for them.  But they said “no”.  And then one year later, he tried again.  They said “no”.   But the third time was a charm – read on:

The third try (this was about 8 years ago) he finally got to the right people who saw the wisdom in such a collaboration, and they made it happen.  And it was a huge success – core shops started carrying the boards, sales increased and the license between Drew Brophy and Wham O continued for 7 years in a row.

Being told “no” crushes your feelings, particularly if you are an artist.  Art is so personal, and when someone doesn’t want what you’ve put your heart and soul into, it hurts.  But it’s just business, and if you can put your head into KNOWING that it’s just business, then you can react to a “no” without showing negative emotion.  Which leaves the door open to that client to come back to you later when they change their minds.

The next time a client tells you “no” make sure you politely thank them for their time, and be sure to close the conversation with “please let me know if you change your mind.  The offer will remain open.  Let’s keep in touch.”  And then follow up occasionally, reminding them that you have something to offer.  Chances are, they will eventually buy from you.

The word “no” doesn’t mean “no” forever, it just means “no” for now.  So keep your door open to all those “no” people, keep in touch with them, be friendly and professional, and they will eventually come around and say “yes”! 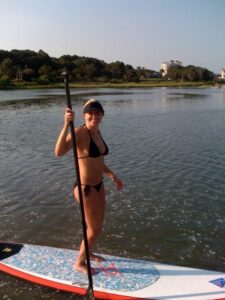 Maria "Spunk" Brophy - Out of the Office

Maria “Spunk” Brophy (who never takes “no” for an answer……)