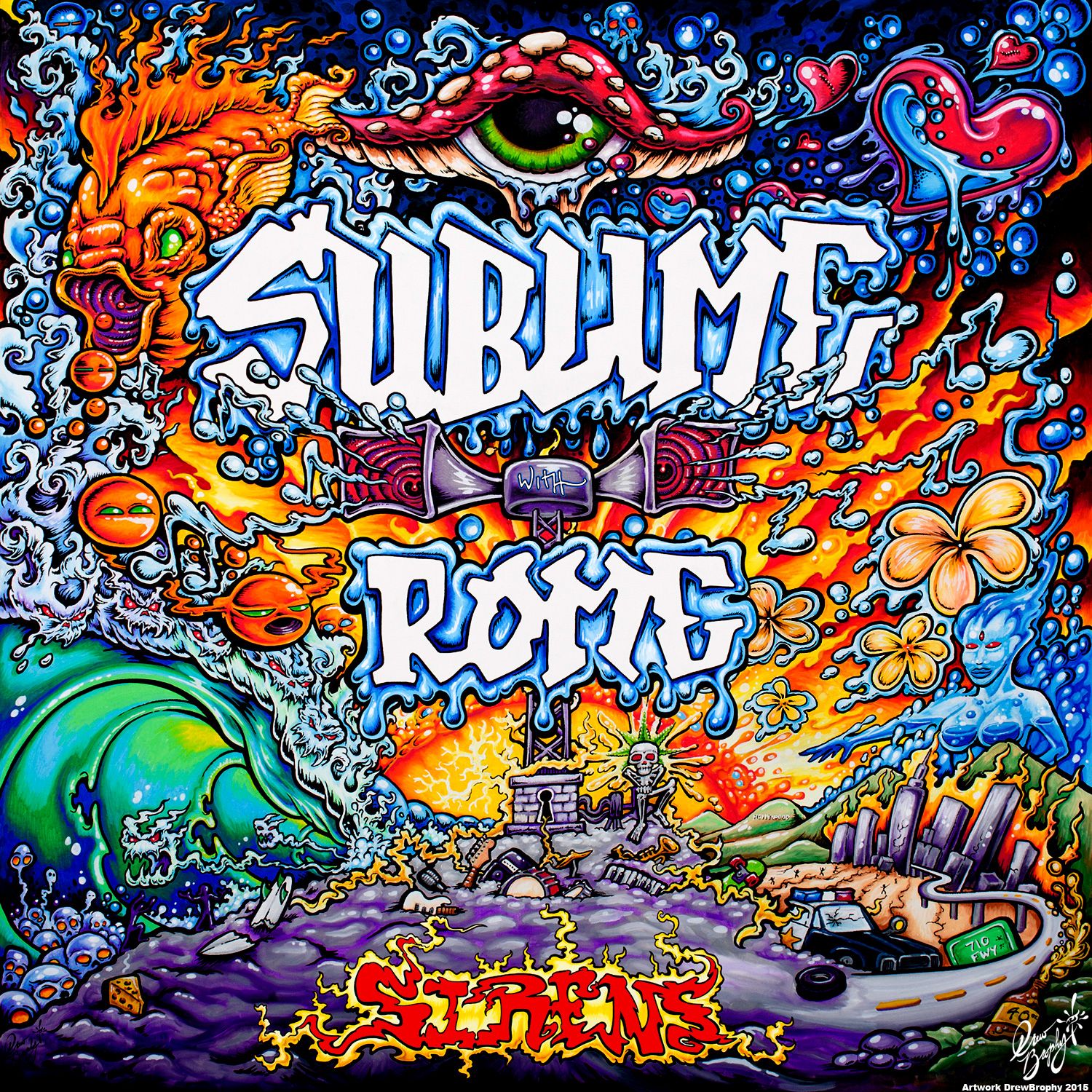 Posted at 06:14h in Behind the Scenes..., Painting Story by Drew 0 Comments
17 Likes
Share

In 1996 Sublime’s music was a big part of my life.  That was the year when my life  as an artist changed dramatically; I had just moved to California from Hawaii and was painting surfboards for Lost.  It’s also the year that I met Maria.

At that time, Bradley Nowell’s lyrics and music impacted all of us; at our parties Maria would play Sublime’s self titled CD over and over again.

That’s why we were so stoked when Maria got a call from Sublime with Rome’s record company in May.  They asked if I would want to create the art for their new album.   She said “Hell Yeah!”

I’ve always been a fan of Opie Ortiz, the artist who created art for Sublime’s albums, including his iconic burning sun for the 40 oz. to Freedom album.   That art will live on forever.

It felt good to know that my work has progressed enough to be in the same company and to be able to work with talented people like SWR’s Eric Wilson, Josh Freese and Rome Ramirez.

We had a super tight deadline, I had only 10 days to get it done.  Sometimes deadlines force you to do your best work.

I wanted the art to be authentic.   I spent a lot of time on the phone with Rome, feeling him out, picking up the vibe and listening.  One of the things I’m really good at is soaking up someone’s energy and then putting it into the art.   Rome’s whole spin-off was about sirens going off; the world’s a crazy place.  I had to put that into the art somehow.

I listened to the new album for inspiration.  It helped me come up with ideas for the art.  No doubt we’ll be listening to these songs for years to come, they are so good.  One fan of SWR said it best about Rome continuing the music that inspired so many – read that at the bottom of this post.

After gathering my ideas, I drew my first concept sketch and sent it to the band for feedback.  Rome e-mailed me back with “WTF! You’re killing it!”

We nailed it on the first sketch.  It’s cool when projects go down like that; it just kind of happens, no dragging on.  I started the painting right away.

I painted two 36” x 36” paintings on canvas; one with the art and one with the hand-drawn lettering.  That way I could use the artwork, without the lettering, for limited edition art prints.  The band agreed to sign 100 of the art prints for me, which is awesome.

THE ARTWORK:  (Click here to see in-progress photos of the work or watch the video of it being painted here)

There’s a lot of elements in the art and each piece has meaning to it.  Here’s just a few:

The little skeleton guy; I pictured the old WWII air raids when they had to crank the siren.

The mushroom is a spin-off of Opie’s mushroom from the original Sublime art.

The heart represents Rome singing his heart and soul out on the stage.

The depiction of Long Beach is the pile of rubble they’re sitting on.  It’s getting ready to be hammered by a giant wave.  There’s an off-ramp to the 710 freeway to LA, which is shaking as a big earthquake comes through.  The cop car in pieces is all that’s left of the cops.

The sexy siren is an omen, a ghostly premonition.

The psycho garibaldi fish is a throw-back to the Bad Fish lyrics.  I’ve been drawing this fish forever and wanted to include it.

There’s a tribute to Bradley in there, I’ll leave that up to the viewer to figure out what it is.  (Share in the comments what you think it is.)

This painting came together quick and easy, it just flowed.  I’m happy with how it turned out, I hope everyone else is, too.

The new album is called SIRENS, it released on July 17th.  You can buy it here.

Also, there are limited edition prints of the artwork available; 100 of them are signed by the band members.  You can order them here while they last!

“Sublime is my all time favorite band. All the music that Brad created with Bud and Eric will forever be entwined with my soul. I know every word to every song that they made. If it wasn’t for Sublime, I would be lost in a dark abyss of depression self loathing.

Thanks to Brad I know what it’s like to be waiting for my ruca, I know that loving is what I got and for motherf**kers to remember that, and if I’m drunk by noon it’s ok, cuz I’ll be president someday. But sadly I was never able to see Brad perform live.

And I never dreamed I would be able to hear his music come to life on stage. Until you (Rome) came along.

I have had the privilege of attending two of the Sublime with Rome concerts in El Paso. And they were both amazing! Now I’m glad to say that thanks to you if been able to tell a girl to take it or leave it, I understand that lovers change like the seasons, and my world is a little bit safer. I can’t wait for the new album to drop, I already pre-ordered it. I just hope you know, Bradley would be proud. Keep up the good work man. Much love from the biggest Sublime fan I know.P.S. I know every word to your songs too “

Video below shows the drawing and painting of the artwork: