Posted at 05:09h in Behind the Scenes..., Murals by Maria Brophy 2 Comments
20 Likes
Share

“When you set a goal, you usually hit it.”  Drew Brophy says of determining what he’s going to accomplish each morning before he starts on a project.

Drew’s busy painting this huge wall mural, so he asked me to write this post for him!

Drew was commissioned to paint a mural on the side of Lulu’s Cafe in downtown Myrtle Beach, South Carolina.  The owner, Misty, wanted to transform her restaurant’s 61′ x 16′ wall which faces the main Ocean Blvd.

To see an amazing time-lapse video by The Digitel of the first few days, Click here.

THE DESIGN:  Misty and Drew decided upon a theme of “A day at the Beach” where the mural would depict the elements that make Myrtle Beach special.  Everything in the sketch is meaningful to this area, right down to the turtles and the banner plane.

THE PAINT:  We started this project by ordering 404 cans of Mtn 94 Spray paint, in over 60 different colors!

The paint shipped from San Francisco and arrived 8 days later to Myrtle Beach on a pallet weighing 440 pounds.

Drew prefers Montana Mtn 94 spray paint because it dries fast, holds up great in weather and the colors are vibrant and bright, much like the Uni Poscas that he likes to paint surfboards with.

Below is a recap of the first six days of the mural painting.  Drew still has about six more days to paint, if everything continues to go smoothly.

GOAL – Break it all down into a grid so that the art is applied in proportion.  Apply chalk lines in a one-foot by one-foot grid on the entire wall.

It took over six hours, just to chalkline the wall.  Drew and his Dad worked at it together, using rickety ladders, and climbing up and down the roof.

We didn’t rent the double decker scaffolding, as we didn’t think we’d need it yet.  In hindsight, it would have been a good idea to have on day 1!

Why did Drew create one-foot squares rather than two-foot squares?  He said that it would make his job easier on Day 2 to have smaller squares – it would be clearer where to intersect the elements of the outline.

The grid is Drew’s map, which he will refer to a lot in the next 2 days.

GOAL – To get the entire mural sketch transposed onto the wall.  Also, to work out the logistics and problems (such as scaffolding) so that on Day 3 the painting could flow.

There are things y0u don’t think of when painting a mural of this proportion.  For example, the scaffolding.  Someone has to build it.  And that someone is you, or in this case, Drew!

Before he could even begin the sketch on the wall, he had to get the scaffolding up.  And wouldn’t you know, the rented equipment didn’t come with pins in the wheels!  Rather than allow that to slow him down,  Drew stuffed screwdrivers in there instead, and taped them on.  You have to be resourceful!

Then we ran into another problem – the scaffolding wasn’t rolling because the space against the wall is dirt, with big potholes left from the people who dug out the bushes.  At one point the scaffolding came crashing down and luckily, there were people there to help catch it.

Now, onto the most important goal of the day:  transferring the “map” of the sketch onto the wall.

It was crucial here that Drew matched the squares in proper proportion.  It was painstaking and time-consuming, working in sections, Drew holding the gridline map in one hand while “sketching” on the wall with spray paint in the other.

Drew discovered that he had to change one thing in the sketch – the dolphin had to be smaller than planned, because his nose was being cut off.

Interviewed for the evening news

GOAL – Get left side of mural color filled in; solve the problem with the scaffolding

We brought rakes this day and got all the pine needles swept out so the scaffolding would move easier.   The weather was so hot we must have drank twenty gallons of water.

It was a Friday right before the holiday weekend, so a lot of random friends, fans and family members stopped by to watch.

A TV crew came from a local news channel, so Drew took a little time out for an interview.  It aired later that day on the 6:00 o’clock news!  Watch the video of it here.

It was an exhausting day for Drew, climbing up and down the scaffolding all day in the blazing hot sun and humidity.  It was very physical work, and he realized that he needed more help to conserve his energy for painting.  So we hired someone to come and help Drew the rest of the week.

Drew reached his goal; he got most of the color on the left side.  That night, we camped out under the stars with family and enjoyed paddleboarding under the blue moon.

Drew and Maria enjoying the progress

GOAL – Get right side of mural color filled in.

We camped out the night before, and were feeling a little less eager to work today!   But, we rallied and got to the Wall about 10:00 a.m. for another full day in the sun.

We hired a local artist named Ian to help.  His job, as I put it to him, was to be right next to Drew every moment, ready to hand him a color, help him move the scaffolding, and to help set up and tear down each day.

It was a huge help having Ian there.  His assistance meant Drew would have to climb up and down the scaffolding less, and would be able to use more energy for painting.

First order of the day was to organize the colors and sort the caps.  It’s crucial to have a clean cap ready when doing detail.  If you’re disorganized and your dirty caps get mixed with clean ones, you may have a problem.

Dad painted the sandcastle and the sand today.  I think he had fun using the spray paints, though later that night he said his fingers hurt!

Caps make all the difference

GOAL –   Fill in the color of the water, on the bottom; work on the wave

Since he was focused on the bottom part of the wall today, he would be on the scaffolding less.  So Drew was happy that he could wear his Keen Flip Flops with the toe protector, instead of those hot hiking boots he had been wearing every day!

This was Sunday of a three day weekend, so there were a lot of people checking out the mural.  Drew’s nice and says hello to everyone, but it was slowing him down quite a bit.

We put out postcards with information about Drew for people to take, since so many showed interest in knowing more about him.

The Sun News Myrtle Beach came and did a story on Drew and the mural.  There were also a few magazines taking photos and lining up interviews.

GOAL – Paint the surfer on the wave, start adding other details

Ian has worked out to be a huge help.  Painting a mural this size, in the blazing hot sun and humidity, takes it’s toll physically.  Ian saved Drew a lot of energy by handing him paints up on the scaffolding, helping him move things around and he even helped painting.

On this day, a local TV news Anchor, the beautiful Lisa Edge, came by and interviewed Drew.  It aired on the evening news Channel 15.  Click here to watch.

WHAT’S NEXT:  About 6 more days to completion.  We will post an update after it’s finished.

Please, leave your comments or questions for Drew in the comments! 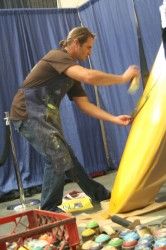 We are taking THE PAINT SHOP TV SHOW live to Sacred Craft Consumer Surfboard Expo this weekend in Santa Cruz!

Two painting demonstrations will be given by Drew and filmed on-site for our show THE PAINT SHOP WITH DREW BROPHY.

Drew’s demonstrations are designed to share surfboard painting techniques that can be used by both the novice and the experienced artist.

Sat. March 19 Noon to 1:00 p.m: Drew will give a Graffiti-style painting demonstration and will show how to customize your own surfboard with a few cans of spray paint and stencils. Demonstration will be held at the SurfAide Shaping Bay.

Sun. March 20 Noon to 1:00 p.m: Drew demonstrates his medium of choice, Uni-Posca paint pens, on surfboards. He will share tried and true techniques and will discuss preparation, composition, color blending, and sealing.

One Drew Brophy art print will be given on-site to each person who confirms attendance to Drew’s demos by March 18. (Prints priced at $20.00 for everyone else).

To get your coupon, e-mail your name to info@thepaintshop.tvand confirm your attendance to Drew’s demonstration.  A coupon for the free print will be emailed to you.

Drew will discuss how you can have a viable career painting surfboards, and how retailers can increase sales with surfboard art.  Bring your questions!  This demonstration will be held in Drew Brophy’s booth #B8.

WHO: Any surfer or artist who wants to learn new techniques or has aspirations of a career painting surfboards, and for those who shape or sell surfboards.