#KEENFest is a 3-day adventure in creativity and fun, held during the Outdoor Retailer Show in Salt Lake City, Utah.  Below are some of the highlights:

WHERE:  115 S. Temple, right across the street from the O/R show palace.  (See invite below)

WHO:  Attendees of Outdoor Retailer Show – just have your badge and you’re in!

I’ll be talking story about my adventures, searching for big waves and gnarly rivers to SUP.

When I’m not painting, I’ll be spending time visiting my sponsors, such as Keen Footwear, at the show.

See a few examples of paddles I painted for Riviera in the past, below.

Come see me, if you’re there!  (And if you’re not able to be there, follow the pictures as they are posted, on my Facebook Page, here.) 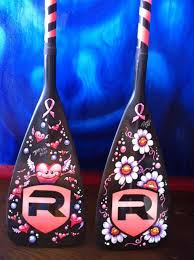 Show host Bob Grove will be asking Drew about his 225 Mile Standup Paddleboard expedition down the Colorado River, through the Grand Canyon.

If you are within listening range of the show, stay tuned for the giveaway!

Bob Grove will be giving away to a listener one pair of the newly released Aerial 7 Drew Brophy “DIY” Headphones to a caller.   These headphones retail for $100, so it’s a generous gift.

27 May Inspiration, Flaming Pigs and the Painting of a 53 Foot Mural on a Trailer

As an artist, I am always looking for inspiration.

I often get asked “how do you make a living as an artist?”

Big companies are cutting back, many people are losing their jobs and I can’t rely on corporations to keep me afloat with commissions anymore.

The people who have kept us in business during the lean years are the entrepreneurs, the do-it-yourselfers, the people who are creating their own opportunities, and in effect, ours too.

I’m inspired by individuals who refuse to give up on their dreams and who make things happen, instead of looking for a handout from someone else.

In our business I see people like this who inspire me every day.  Davon Julius’ Pipeline Catering project is a perfect example of American ingenuity and grass-roots entrepreneurship.

Davon had a bold idea:  He saw an opportunity to create a mobile restaurant that caters to pipeline workers in a rural area of Utah.  He envisioned transforming an 18 wheeler into a kitchen and café where he could set up in remote areas where workers needed to be fed.

This is where I came in.  Davon wanted to make his café stand out on the side of the road.  He came up with the idea to hire me to paint flaming pigs on the side of his trailer.

At the bottom of this post, there’s a “narrated” slideshow detailing the painting with captions explaining the steps.

I first met Davon a year ago when I standup paddled 225 miles of the Colorado River.  He was one of the rafters going down the river with my group.  A chef by trade, he took charge of our meals for the 16 days of camping alongside the rivers of the Grand Canyon.  We ate well!

Painting a 53 foot mural is a huge project, and I had to travel to Utah to do it.  Davon saw the value that a mural would bring to his business, and so he didn’t flinch at the cost.  We made a family trip of it, and off to Utah we went.

I feel so blessed that through my work and lifestyle, I am able to reconnect with these great people I met while paddling the Colorado River last year, and that I’m able to take my family to meet them.

This is what I envisioned my life to be so many years ago:  my work, family and travel life all together as one big adventure.

We arrived in Salt Lake City and Davon had parked the trailer in a dusty, plowed field behind his home.  He was working hard building the kitchen and he expressed that friends were concerned about what the hell he was doing.  They didn’t get his vision.

Often, people with big ideas find themselves alone until after all the hard work is done, then everyone else can see the beauty in it.

I told Davon “Don’t worry, after today, people are going to get it.  This is going to transform instantly, as soon as I start painting.”

Initially, my goal was to have it started and completed in five days.  Below is the breakdown of the process of the mural painting:

DAY 1:  My goal on Day 1 was to map out the sketch and have base colors on the entire surface of the trailer.

Davon had pre-scuffed the surface, taped off the edges and was busy preparing last minute dents and holes.

Dylan and I began chalk-lining gridlines so that I could transpose the sketch onto the huge surface as Maria unloaded the 200 cans of Mtn 94 spray paint that was going to make all of this possible.

It was hot, but I dressed in a hoody, with a respirator, headphones and gloves.  I put on the astro-fat caps that allow me to put down massive amounts of paint quickly.

For the rest of the day I blasted music along with paint.  Davon was amazed that by the end of Day 1, all the color was on!

Day 2:  This was an easy day.  The weather was hot and sunny. It was record highs for Utah in April.  Day 1 all the base colors were mid-tone, and on Day 2 I added the lights and darks.

This day went remarkably well, and I was thinking that I might get this finished in three days instead of five.  That was before I knew the weather that was about to hit us.

Day 3:  This day started out beautiful with sunny skies.  A storm was coming, but I was hopeful that we may miss the weather and still get this done on Day 3.

Dylan kept busy by playing with the chickens and wild roosters in the field.  All day long those roosters were crowing.

I broke out the Iwata airbrush and started adding detail to the funny characters; the buzzard, the pigs and the rattlesnake.  This was the fun part!

Then, about noon, the sky turned black.  Davon, always prepared, had huge tarps ready to go on the roof of the trailer.  We got ready for the rain by throwing down the tarps.  Just then, the wind picked up at 40-50 miles per hour, throwing Davon and I around like rag-dolls across the field.  It was gnarly!

It took us the rest of the day just to secure and protect the mural from the extreme weather.  We were exhausted.  There went my plan to finish early!

Day 4:  Was a bummer.  Water was leaking all over the mural.  It was a constant battle of man vs. rain.  The wind was so violent that it threw cinder blocks off of the roof of the trailer, almost killing us.  The temperature dropped so much that I had to wear gloves because my hands were cold.

I didn’t get much painting done on Day 4.  It was a losing battle.  I decided to go inside and make stencils for the lettering.

It’s funny, people will ask me how I make things like my stencils, and the answer is surprisingly simple.

The stencils are made with simple construction paper, a pencil, a razor blade and tape.  These are the tools that I used to make my stencils.  No fancy machine that cuts out lettering for me.  I’m amazed that in this computer age so many young artists don’t know how to use a ruler, simple math and a razor blade.

I cut the stencils out to scale perfectly.  It took a lot of time and patience and focus.  But in the end, it worked.

Day 5:  We were staying at Davon’s mom’s awesome mountain house in Park City.  The morning of Day 5 we woke up to beautiful snow covering my van and the world outside.  Our commute to Salt Lake City was about 35 minutes each way, and the drive is on beautiful mountain roads.

But down in Salt Lake City, the rain and wind were still a problem.

I was determined to get this finished today.  Working underneath the tarp was super difficult.  But we had no choice.

Davon did everything he could to stop the rain from getting in.  He bought more tarps and parked his truck on the tarps so they wouldn’t blow away.  We collected every rock, board and heavy object from the field and placed them on the tarp, trying to hold it down.

I finished the detail work with the airbrush.  The final thing to do was spray the lettering.  The custom-made stencils worked beautifully.

One of the most fun things was pulling the tape.  Davon pulled the tape to reveal the name, PIPELINE CATERING, on the side of his new restaurant!

Just then, the rain stopped and the sun came out.  The storm was over.  We went up to the roof of the trailer and kicked the tarp off to see the finished mural from afar, for the first time.

It was awesome to see the results of our hard work.

The mural was finished in five days.

PARTYTIME!  That night, we celebrated at Davon’s mom, Shelly’s, home.  She also was on the Grand Canyon river trip last year, and she and her husband Barry hosted a party with almost all of the 14 people that were on that trip.  We watched Go Pro video of our adventure down the Colorado River and talked story all night.

It was so great to reconnect with these wonderful people and let them meet my family.  This is what life is all about.

I was honored to paint this mural for Davon’s project and see how one man’s dream and hard work materializes right in front of your eyes.  The restaurant is finished, and now people “get it”!

I’m sure Davon is working hard in his restaurant right now, feeding hungry workers.  If you happen to drive through Northern Utah, and you see flaming pigs, stop and get a bite to eat!