The Waves Came – and they were BIG.  Just in time for Drew’s 38th birthday.  His first surf at Indicators was super – the waves were triple overhead and FAST.  He was having the best surf of the trip, until…..

His fins broke out of his board.  To get his other board out of the van would be another hour, due to the required hike around the point.  So he waited until later, and paddled back out for the evening session – on his brand new, never been waxed Ron House 6’8” gun.

Drew surfed for hours and caught some of the longest waves he may have ever ridden – one was about a quarter mile.  Eager to catch one last bomb before calling it a day, he hiked the point once again, jumped into the pumping waves, and hit a rock – and broke out yet another fin box.

Now out of surfboards, and with the swell picking up even more, we were in trouble.  It was about 8:30 at night, and surf shops in Raglan don’t open until after 9:00 the next day, which means he’d miss the morning session, the best of the day.

Then we got lucky.  We drove through the lot to check the waves at Manu Bay and ran into Craig Hughes, owner of Raglan Surf Co.  He was loading up his wife & kids after a surf when we saw him.  Being the generous Kiwi he is, he offered to take Drew to his shop then & there to pick out a new board.  It’s so nice to know cool people!

For Drew’s Birthday, he bought himself a new Craig Hughes T&C board and caught more great surf the next morning, which happened to be his birthday.  What added to the magic of this surf spot is that Drew met a few different people in the surf who had bought his video and paint pens.  One was a young Frenchman name Moc, who shamelessly admitted that he’s been copying Drew’s art since he was 12 years old.  The other was an older surfer visiting from Oz who just bought the paint pen kit online about 6 weeks ago.  Our world just gets smaller and smaller….. 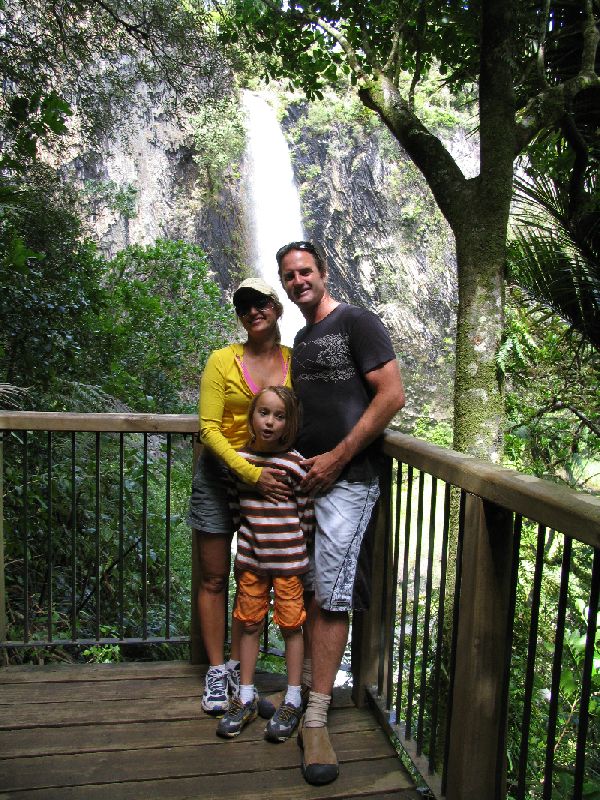 Another fun thing in Raglan was hiking to Bridal Veil Falls.  We love the rainforest treks, where you can be hot as hell one minute, walk into the forest shade and be cold, then rain will come, then sun again.  One Kiwi explained their weather like this:  “We get all four seasons in a day here, Mate!”

We leave for Auckland today.  Raglan’s been good to us – we know half the town now and we’ve made great friends.  For the next two days, instead of surf we’ll be enjoying city life.  It will be a nice change! 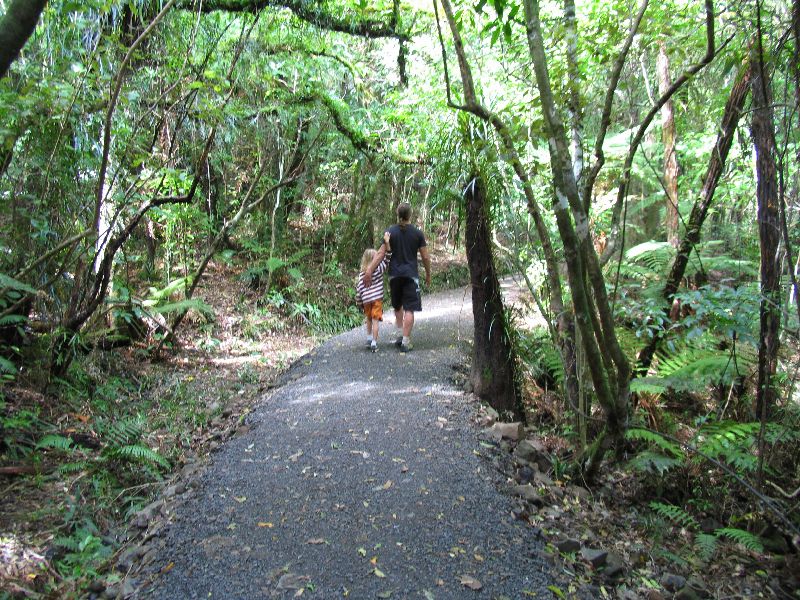 Drew and Wiggs at Falls

The "road" to getting boards repaired

Life is Good – Drew and His Crew xxoo