Posted at 04:29h in Adventure, Behind the Scenes..., SURF SUP and Paint Tour by Drew 3 Comments
42 Likes
Share 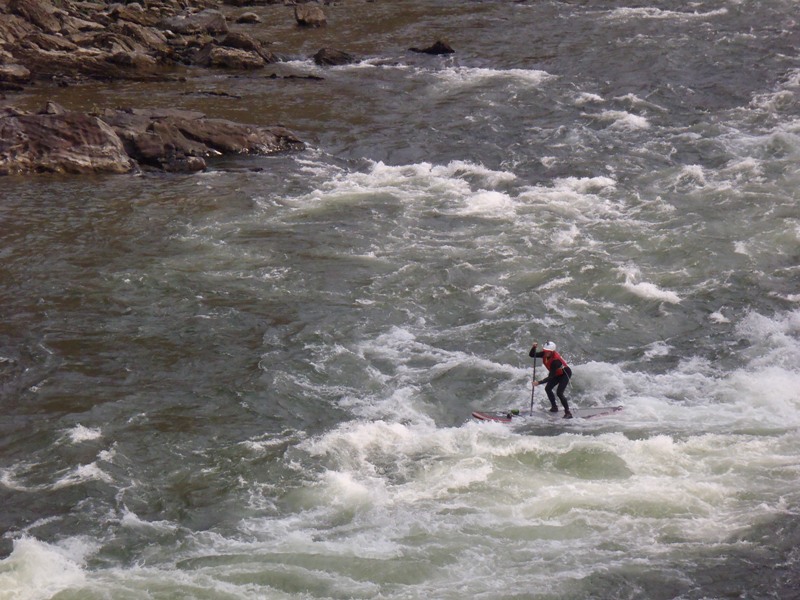 Salmon River Run on a SUP!

I had heard a lot about the Salmon River from some of the crew that I paddled the Colorado River with last year.

So about a week into our three month Surf, SUP and Paint Tour, I planned a day to SUP the Salmon River.

Maria and the kids and I had been exploring Idaho for about four days before we got to Riggins, a town that calls itself “the Whitewater Capital of Idaho”.

Right next to Riggins is Lucile, where we set up camp for a few days. Lucile is a one street town where there’s no cell service but plenty of deer, bears and elk.  Our friend John is building a house there along the Salmon River and said we could camp on his property, though he was out of town traveling as well.

I had everything I needed to standup paddle the river except for one thing:  a life jacket. On the drive to Lucile I was telling Maria that we needed to find a place to buy one.  Then, a few minutes later, on a desolate road nestled between 10,000 foot peaks, I saw something lying in the middle of the road.  It was a brand new lifejacket! I turned the van around and picked it up.  Now, I had what I needed to SUP the Salmon:

I put into the river at Shorts Bar.  It’s a killer sandy beach where we spent the day trying out our new paddleboards in the river.  There’s a nice little eddy there that the kids could paddle around in.

Maria tracked me from the road in the Dream Machine and took pictures from the bank.  There are great lookouts at each rapid, so it was easy for her to pull over and get some photos as she watched me surf the rapids.

This time of year the river is running low and the rapids are minor, but enough to give you a good thrill.   The Riviera Inflatable Standup Paddle board was perfect for this river, since the water was low and there were a lot of sharp rocks that other boards would be damaged by.

The biggest rapid is called Time Zone – it’s right before the bridge at the far north end of Riggins. Time Zone is a long, snaking rapid with a ledge running down the right side.  The current zig zags back and forth, all the way down to the bridge. I stuck that rapid, swinging left to avoid the ledge.  I was pretty stoked – it’s been a year since I’ve run a rapid.

After Time Zone, there were about a dozen smaller rapids with a lot of space in between to rest.

This is big country out here!

Along the way I saw big horned sheep, deer and beautiful landscapes.  It was really peaceful being on the river alone.

It took me two hours to go 11 miles.  I ended at the boat ramp on John’s property in Lucile.  Dylan ran down and handed me a beer when I got out!

I wanted to do it again, but it was getting dark and the kids were hungry.  We were headed to Montana at 5 a.m. the next morning.  I’ll have to come back another time, but in the spring when the water is higher and the rapids are gnarlier!

I think any surfer or standup paddle enthusiast could do this run safely during the summer at this water level.  Spring would be more challenging.  If you were spending a few days up there, you could do the run a couple times a day and then drive further up river and do a longer run, where there are bigger rapids and killer standing waves.  I can’t wait to come back!

See the Video, below: