Want to stop people in their tracks?

Stand out in a Crowd?

Drew Brophy has been creating magic by painting live at events since the mid 1990’s.

He has a reputation for entertaining with his fast painting skills and for holding the short attention span of passers-by.

Drew is a pro at inspiring through his warm personality and his ability to start and finish a painting in just hours.  The crowds love him!

Below are a few ways we can help your company or private event be even more amazing.

“It’s important to our clients that their guests have a memorable evening.  That’s why we hire Drew Brophy; he knows how to work a crowd.  When he paints at one of our events, we know that the guests will have a great time!”  Cami R., Account Exec., 360 Destination Concepts

Want to attract people to your booth?   Drew will draw them in by creating a fascinating, live painting with paint pens.  No-one will walk past your booth without stopping to look!

To sweeten the pot, he will give away posters at your event, which he will happily sign for your visitors.

He’ll paint a surfboard, guitar, canvas, even shoes; just about anything that fits in with your mission.

He will even work your logo and theme into the painting; that sort of design work comes easily to Drew.

Here’s just a few companies that Drew has painted live for:

He’s worked with some of the top Event Production Companies in California, including 360 Destination Group, LA Party Designs (LAPD), and Destination Concepts, to name a few.

From painting at a private party for the owners of the Nation’s NFL Football Teams to charity events like MiOcean, Drew has entertained many different crowds of people.

Drew uses non-toxic, non-messy, no-smell Uni Posca Paint Pens.  This medium allows for a free flow of bright colors and for fast painting, which comes in handy at events.

The beauty of having a fast painter is this:  your guests will enjoy the pleasure of seeing a painting come to life right before their eyes!

We offer many different options for your events.  Here’s just a few:

Add fascination to your festival or fair by having Drew paint a mural while your attendees watch!
.
The possibilities are endless, but here’s a tried and true concept:  Drew will paint a mural on wood, and it will be designed for photo opportunities during your event.
.
Drew has painted murals at many events, including surfing events such as the Pipeline Masters in Hawaii and contests such as the Battle of the Paddle races in Dana Point, CA.
.
See an example of the Rainbow Sandals Battle of the Paddle mural Drew painted on-site in 2009.  It doubled as a mural and a photo-backdrop for the awards ceremony.

Contact us directly, or have your General Contractor or Event Production Company call us for a proposal at 949-678-8133 or info@drewbrophy.com.
We look forward to serving you!
.
Read More

Crystal Cove Media is excited to announce the launch of a new uplifting, fast paced and fun t.v. show focused on revealing what really happens inside the studio of a Surf Lifestyle Artist.  This six episode series premiered on Cox February 12, 2011 and runs through the summer of 2011.

Produced by Crystal Cove Media of Newport Beach, and created by art marketing expert Maria Brophy, THE PAINT SHOP WITH DREW BROPHY gives viewers an unscripted, behind-the-scenes peek into the professional scene of surf lifestyle artist Drew Brophy.  Each episode captures the joy brought to clients through artwork as well as the complications and challenges that a working artist must deal with.

Dispelling the stereotype of what an artist really does, THE PAINT SHOP demonstrates that being an artist is a very viable career and it reveals the process of painting, creating and business knowledge that is required.  The show takes place in Brophy’s art studio in San Clemente, California, and incorporates real life interactions between Brophy, his business partner wife, Maria, and their clients.

Drew Brophy has been a professional artist for over twenty years and together with his wife, Maria, helps other artists to design the career of their dreams.  An avid surfer and world traveler, Brophy exploded on the surf art scene in the late 1990′s with his wild surfboard paintings.  Now he says that it’s his job just to “make things look cool.”  Brophy currently has hundreds of collectors of his original art as well as thirty active licensees that use his art on their products.

The first episode titled CRUISERS, SKULLS & CHAINS takes you through the steps of Drew designing and creating eight foot paintings to be used for his signature beach cruiser bikes.  The guest segment features world famous surfing legend Gerry Lopez as he stops by the studio and asks Drew to paint his surfboard.  A third segment breaks down an easy way to paint a used surfboard with spray paint, stencils and chains.

Brophy says of his intention with this show, “Being an artist is more than just painting pretty pictures. I want people to know what really goes on with the business of art and I want to inspire others with the idea that they can do it, too.”

Show creator Maria Brophy explained how she came up with the idea, “I wanted the challenge of creating a new show format, one which is real, but focuses on uplifting and positive aspects.  This platform enables us to share the joy as well as the disappointments that a lifestyle artist encounters, and the lessons learned.  The episodes will organically lure the viewer in, as each day in the studio brings new excitement and life changing lessons.”

Executive Producer and Co-Creator Brian ILL has spent the last three years documenting Brophy’s projects.  He says ”When I spend a day with Drew I always end up learning something. Whether it be about how he runs his business, or a cool personal story, I always take something away. I’ve actually used the things I’ve learned from him in my own life, and that’s what I want this show to do for the viewing audience. I want to present the experience accurately, so that the audience feels like they are also gaining something from spending a day in the life of Drew.”

About Drew Brophy:  Drew Brophy is represented by Son of the Sea, Inc., who is the Master Licensor for Drew Brophy Properties.  Drew Brophy is a surf artist dedicated to teaming up his action sports inspired artwork with licensees who produce quality lifestyle products.  Contact Maria Brophy at 949-354-ART1, e-mail info@drewbrophy.com, or log onto www.drewbrophy.com.

About Executive Producer and Show Creator Maria Brophy:  Maria is an art licensing and marketing expert.  She has managed art careers for lifestyle artists for over a decade. She is the CEO of Son of the Sea, Inc., Master Licensor of Drew Brophy Properties.  Visit http://www.sonofthesea.com

Our TV Show has Launched!

After three years of creating and cultivating THE PAINT SHOP TV Show, we are so pleased to announce that it is now on the air in Southern California!

We are very confident that it will expand to cover most of the country.  It just takes a little time…

Our goal with this tv show is to inspire and educate people on the viability of art as an actual career.

It’s also a great way to show friends and family what happens behind the scenes of a lifestyle art studio.

We teamed up with Executive Producer Brian ILL of Crystal Cove Media to create this show for tv.

For the past three years Brian and his crew have been documenting Drew and our work at the studio.

Our first episode started airing this week and the 6-episode series will run through spring and summer.

THE PAINT SHOP chronicles the process of what a professional surf lifestyle artist does, including the good times as well as the challenging.  There’s never a dull moment when it comes to the business of art!  And every day we learn new lessons in life, love and artwork.

If you are located in Southern California, please check out the show times at THE PAINT SHOP.TV.

If you don’t get THE PAINT SHOP in your area, ask your local networks to pick it up!  The more that people ask, the more likely we’ll get it on the air everywhere.

Please tune in, and let us know what you think. 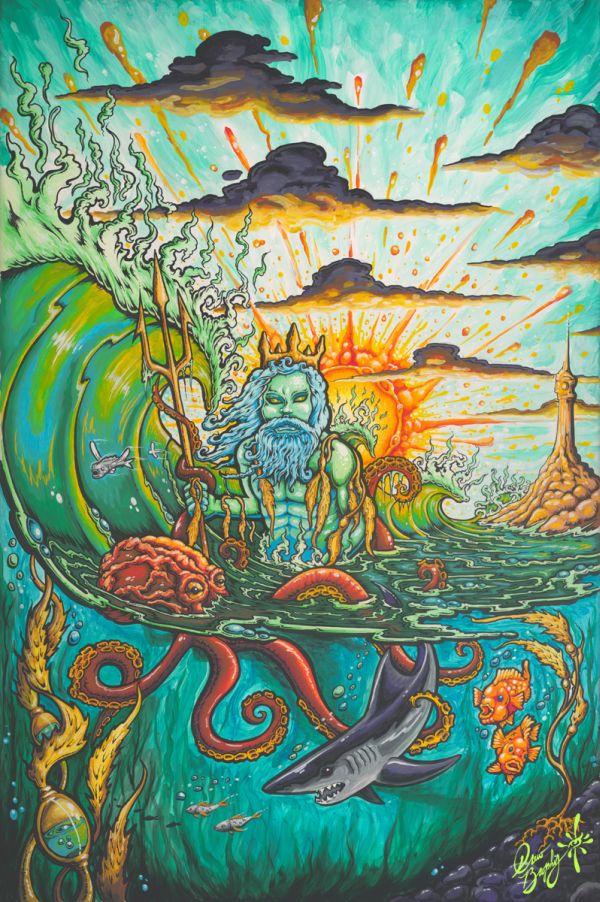 Posted at 14:23h in Behind the Scenes..., Painting Story by Maria Brophy 0 Comments
17 Likes
Share

For the seventh year in a row, Drew’s been asked by the Ocean Institute to create the cover artwork for their summer programs.   Here’s Neptune!

You can buy a beautiful Giclee Print on Canvas of this painting  in our STORE.

UPDATE TO THIS POST (March 2011): The O-I ended up not using this artwork after all.

We were greatly disappointed at first, because of the hard work involved in it, but it all worked out great in the end, as everything always does.

An art collector named Tim Smith saw it on our website and purchased the original painting a week later.

So now Neptune is in a good home. Giclee prints of Nepture are available now in our store. Check it out!

The Journey from South Carolina to Success as a Lifestyle Surf Artist – Drew Brophy interview with Sean O’Brien of Surf Expo.

When did you start to draw?

Drew Brophy: Way early. There‘s a picture of me at four years old with a Styrofoam surfboard and I have my crayons on it. The frustrating thing was when I was in High School, all the things I was good at weren’t important. Surfing and art weren’t important to the school system—or really to anybody. You’re sitting there in South Carolina and everyone’s into hunting and football—you’re just lost.

I remember my High School guidance counselor saying, “Drew, what are you going to do? You just can’t surf and do art for the rest of your life.” I just thought to myself, “Well, that’s exactly what I want to do.”

So the first thing I did after graduation was go to Puerto Escondido. I wanted to surf giant waves. I got noticed, however, because of the art on my boards. I had been painting boards for friends back home and painting for the…

To read the rest of this, please go to SurfExpo.com.